History of the Building

History of the Building

Charnwood Museum is situated in Queen's Hall, the former Victorian swimming baths for Loughborough.
Built in 1897 to celebrate the Diamond Jubilee of Queen Victoria, they were a gift to the town by Alderman Joseph Griggs who became the first Mayor of Loughborough.

The building held a swimming pool, 4 first class slipper baths, 5 second class baths and a laundry.
The baths were very popular as most houses within the town did not have indoor plumbing at the time of opening and would visit for their weekly bath.

When the swimming pool first opened, it had to be emptied and re-filled by a team of men each day which took about 70,000 gallons of water! As such, it cost more to swim in the morning when the water was cleanest - it would get dirtier as the day went on.

The swimming pool closed in 1975 with the opening of the new Leisure Centre on Browns Lane and in 1980 the Borough Council decided to turn the space into a general function hall.
It took just 12 weeks to convert the memorial baths to Queen's Hall, and involved laying seven steel beams across the pool and then covering 35 tons of concrete over it. The pool structure is still there under the floor of the Museum which opened in 1999.

If you have any memories of the swimming pool or Queen's Hall, please get in touch as we love hearing about them. 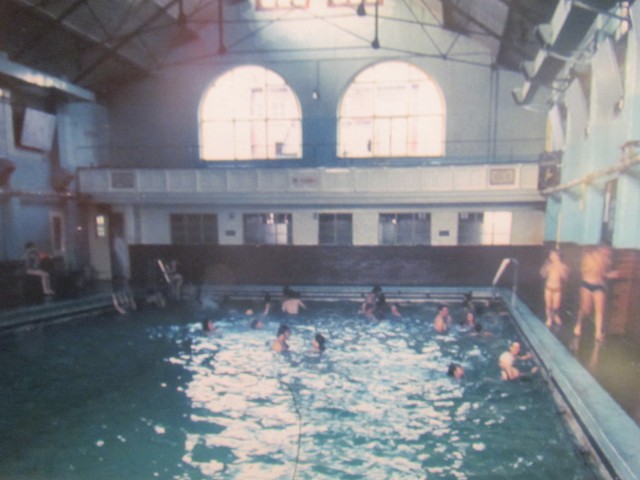